Everyone, welcome Matthew Pegg to the blog. I’m featuring fellow contributors to Death’s Realm, of Grey Matter Press, with a short mini-interview to learn more about the talent involved, a preview of what we can expect from their story, and speculate on what lies ahead in the great beyond. 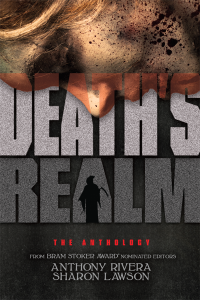 Tell us about your background, who you are, and how you came to the writing life.

I grew up in Staffordshire in England. We lived in an old farmhouse that had a cellar that filled up with water every so often, open fireplaces, no central heating and windows that got covered with ice on the inside in winter. My mother insisted that there was a ghost on the top landing. She never saw anything but she said she could sometimes smell a sweaty smell. It was probably just the drains, or our unwashed socks. I wrote a lot of stories when I was in primary school. I particularly remember writing an alternate version of ‘The Snow Queen’, which had some ideas and characters that I intend to reuse at some point. Then in secondary school I got put off writing fiction by my English teacher, who thought writing stories was kids stuff. How he got the job I don’t know.

I went to drama school and worked as an actor for a few years until I realised I wasn’t great at it and liked having an overview of a story rather than being responsible for just one character. So then I started writing plays.

I’ve written some odd stuff for theatre: a one man version of Twelfth Night, a play designed to be performed during a medieval banquet, an adaptation of the film ‘Onibaba’, a puppet show, street theatre, plays for young people to watch, plays for young people to perform and a version of Rumpelstiltskin that was rather too influenced by ‘Beetlejuice’. I also adapted M.R. James’s story ‘Lost Hearts’ for the stage and then as a short film. Writing for theatre has given me some useful skills: creating dialogue, developing dramatic tension and an awareness of structure but it’s very different from writing prose. A play is probably closer to sheet music than it is to a novel: it’s a set of instructions for actors, designer and director and an audience experience it collectively rather than in a one to one fashion.

I came to writing fiction quite late. I’d always wanted to do it, but I wasn’t sure whether I had the basic skills. Eventually I did an MA in Creative Writing which I completed in 2012. My fiction tutor was the greatly missed author Graham Joyce, who was really enthusiastic about the stuff I was writing. I came out of the course thinking, “Yes, I can do this after all!” It taught me a lot and gave me a big confidence boost. Since then I’ve completed a novel and I’ve been submitting short pieces to various publications.

Gray Matter Press has released an anthology, Death’s Realm, featuring your work, “March Hays.” Give us a preview of your short story without giving away too much.
Sam Meacham is injured during WW2 and sent to March Hays, a stately home requisitioned as a hospital for servicemen. One of the nurses Lily, is the daughter of the house who Sam met when he was a child. As Sam recuperates he experiences some strange and disturbing events in the library of the house, but isn’t sure if they are real or just a side effect of his injuries. He also becomes increasingly attached to Lily and determined to protect her from her monstrous husband Edward, who seems to be a threat to her life.

The premise behind Death’s Realm is what happens after death. If there is a great beyond, what do you imagine it to be?

We thank Matthew Pegg for coming by to share his thoughts. You can keep up with him at his website, here.